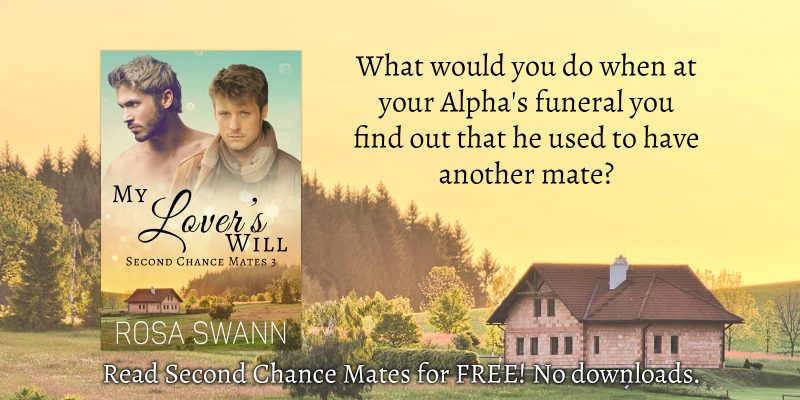 Logan may have great ideas for his mates, but Wilder knows that his family isn't one to just take orders…

– Rosa Swann, author of Mated to the Alpha

Chapter 7 - My Lover’s Will, an omegaverse non-shifter mpreg romance

The next morning, I look down at Sterling as he’s curled up next to me. Last night, we only quickly showered before we stumbled down the stairs and dove into bed. Too exhausted to even think about anything. And now? Now all the feelings I’d been trying to suppress have all come back. How can he look so beautiful? How is that even possible? Or is that just my body or brain telling me that he’s my mate? I don’t know, and I don’t really care. I don’t even want to know right now, I just want to be able to enjoy it.

I slip out of the bed, it’s not too big, but if we curl up we can fit in it together, it’s a tight fit, but it still fits. I guess that maybe getting a larger bed would be a good idea? Probably, at some point, though I don’t mind being squished together with him either. It’s nice. It feels good, comfortable, safe. Not lonely.

It’s before the alarm has gone off and even before Sterling has woken up, but there is already a little light outside. The garden is covered in this greyish light that makes everything feel unreal. Maybe as unreal as the things I have to think about for our future…

Why do I have to decide if I’m staying on with the company or fully take over work for Logan’s company? I was perfectly happy where I was, even if it wasn’t my dream, I was happy, but now even that choice is mostly taken from me by Logan. It’s no use staying on with the company if I then have to pay someone to do work here that I can easily do myself… But is Sterling ready for that? Is Sterling ready to live with me full-time? Working from home would be really full-on full-time too. There would be no way to not see each other all day, constantly.

I quietly get dressed and make my way to the kitchen, there I set up the coffee machine before I grab my laptop and turn it on. I got a reply from HR pretty quickly yesterday. I now know I have about a week worth of free days saved up, and my current project will run for at least another three weeks… This would have been quicker if I hadn’t taken a week off before, but at the same time… It wouldn’t be fair to my team or the client if I just dropped out right now. So I’ll have to make this work as best as I can.

I start scribbling on some paper, trying to figure out my mind. There is so much more going on than just our jobs, there is my house to think of, how we’ll live together here, and even working from here… I can’t work in the living room all day, or in the kitchen. But there also isn’t a room for me here to use as my office. And I can’t just take over Logan’s office, that’s just wrong. I also wouldn’t be able to get any work done there.

“Wild…” I startle as Sterling wraps his arms around my shoulders and leans on me. “What are you doing?”

“Thinking.” I turn the paper over, so he doesn’t see what I wrote, if he hasn’t already peeked.

“Living. Logan’s will. Work. All sorts of stuff.” I put my hands over his arms and hold him. “Why are you up already?”

“It’s morning. I woke up.” He nuzzles me for a moment before he lets go.

“Right, because you don’t need an alarm to wake up.” I sigh, smiling, then stand up, pouring myself some coffee and then Sterling too.

“Nope. But I do like waking up to a fresh pot of coffee.” He laughs as he makes himself comfortable, then he looks at his hands. “We will need to talk about Logan’s will though.”

“Why not?” He looks confused, which I get.

But how do I explain to him that I need to figure some things out myself first? How do I explain that there are so many moving parts of our lives to consider before we decide on anything? How do I explain that I’m going to need to talk to lawyers and people like that first, just to make sure that Logan’s parents won’t be able to break up our family? Logan’s family? Because Logan may have had these great ideas, but that doesn’t mean they’re all viable. He was always a man of ideas, but not always a man of solutions… I don’t want to put pressure on Sterling before I know a little more, especially now that everything has gotten a little more complicated with the little one inside him, and him being mated twice and things like that.

Because if what Sarah told me is true, Logan’s parents are willing to bring everything down around us. They may not have had much interest in Sterling and Maddy when they were only Logan’s family, but they won’t allow them to get close to me. I know that from experience, I know that because they’ve taken Logan away from me before. They will do anything to make sure that they’ll block me, because somehow, they may not have liked me before, but Logan leaving half of his everything to me… they will definitively hate that.

Sign up to the Easily Distracted Media newsletter for updates about releases, sales, promotions and other cool things!

I stand up, crossing the kitchen so I’m next to Sterling. Then I reach out to him, and Sterling leans against me. In all of this, at least one thing is easier, it’s easier being with Sterling now he knows who I am, who I was to Logan, now I don’t have to keep those secrets.

“Isn’t it weird?” I swallow hard, not sure I really want to hear his answer.

“Is what weird?” Sterling hums.

“That Logan pushed us together? That he planned for this without knowing we’d already meet before?”

“I think it’s comfortable. It’s a good thing.” He doesn’t seem that fazed by the idea.

“He cared for us, for both of us. He made sure that we wouldn’t be alone. Don’t you think that’s a good thing?”

That we wouldn’t be alone? Then why did he leave in the first place? “I don’t get it.”

Sterling looks up, touching my face. “He made sure that no matter what, you’d be taken care of. Maybe he even knew you wouldn’t take a mate of your own. He trusted that you’d be able to take care of yourself in the past, but that that maybe wouldn’t be like that in the future. He made sure that you had something of him left, a place to work, a house to live in.”

If he puts it that way… “And what about you?”

“Me? He made sure that I could keep living the life that I had. An Omega on their own… I can’t work without his permission, I can’t do a lot of things without an Alpha’s permission. But you living with me, someone connected to me, even if we hadn’t mated, it would give you the same power as him.”

How can he trust so easily? “What if I turned out to be horrible?”

“You’re not. Or you’d have never mated with him in the first place.” He comes up slowly, pressing his lips to mine. It’s soft, chaste, but it’s full of trust. Then he looks straight at me. “He chose you to give us both the life that we’ve always wanted, even if not with the person we expected.”

I wrap my arms around him tightly. His trust in me, his trust in that Logan must have done whatever he thought was needed. This means that I need to make fully sure that everything will be going according to Logan’s plans before we make any promises and commitments.

You've been reading Second Chance Mates 3 – My Lover's Will 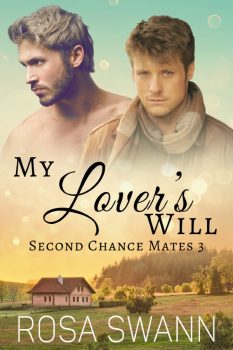 Wilder
Leaving Sterling was supposed to give us both time to deal with our grief on our own.
So why is he standing in the middle of my living room yelling at me? And what about Logan having written me into his will?

Sterling
I thought I was done with surprises, but when I got Logan’s will, I knew something was up.
How well did Wilder and Logan really know each other? Why is Wilder suddenly moving back in after getting a call from Logan’s sister? And how will this all affect the new life inside of me?

Grab your own copy at: 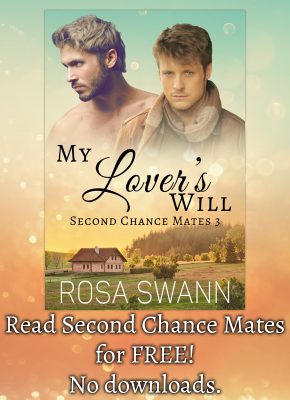