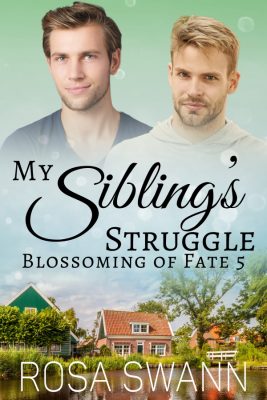 Destin
I never considered our lives to be particularly eventful. Sure, our family setups were a little unconventional, especially with so many people in our close circle running their own companies and all, but there was never much drama going on. Until this year, it seems.
While we worried about me mating Seb, him being pregnant and trying to figure out where to go from here, it seems that we weren’t the only one struggling. Seb’s younger brother, Dan, just dropped a massive bomb of a secret on us, leaving all of us reeling. How are we going to fix this now?

Seb
I thought that the only thing I had to worry about this weekend was our families finding out that I’m pregnant. My biggest fear was their anger or disapproval. But it seems that that should have been the least of my worries.
Dan has been acting strange ever since the summer, and he just told us why. He’d been cheating his way through school all of last year, and he’s failed all of his tests this year. His solution? He’s going to leave as soon as he turns eighteen, which is only two weeks away. So he won’t have to explain to our parents or the school what’s going on. Because if word gets out that he’s been cheating, there will be grave consequences.
I can’t let him do this. I can’t. But it means that I have to make some hard choices, if I want to keep my family together. And it means keeping even more secrets from our parents…

This is the fifth novella about Alpha Destin and Omega Seb in the Blossoming of Fate serial, which takes place in the non-shifter Omegaverse Mates World and contains mpreg (male-pregnancy).