Omega’s Fate (Mated to the Alpha 1) 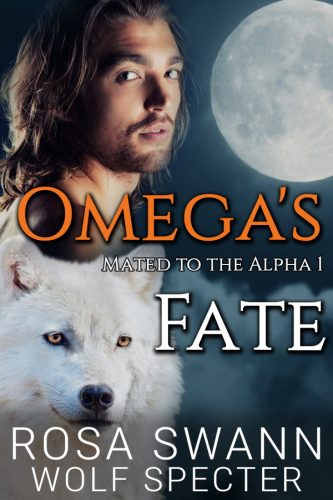 The Mating Ball used to be a yearly event where bachelor Alpha werewolves meet potential mates, but now it’s a party mostly used to hook up with as many people as you can.

Ethan, one of the humans hired to entertain the werewolves, goes into the event with only one expectation: getting paid for having fun. The prospect of maybe meeting an Alpha female is only a bonus.

Max, a successful Alpha, has been getting pressure from all sides to settle down and prove his Alpha genes. Two problems: he doesn’t believe that the Mating Ball works and he is only interested in men.

Once there, he meets Ethan, who catches his attention immediately, but the man insists that he isn’t gay, or interested in Max.

As the ball comes to an end, the two men can no longer deny their attraction and take off together. Only to wake up to a very special surprise.

“Ten thousand dollars, into your account, tomorrow morning, if you’ve spent the night with one of the Alphas.” The man in front of us doesn’t seem very convinced that one of us will be able to do it. “There will also be a group of guys and gals from the packs, but it’s always good to have a group of humans like you on these events, diversity and all that.”

So, we are the human meat, the people in the room who are just there to fill the space, to look pretty, to be insignificant to the actual events of the night. Because what is a formal ball without a group of unwanted people?

I sigh, whatever. I’m here for one thing and one thing only. Flirt, catch and spend the night with a female Alpha, and then get the money and get out of here.

A mating ball, it sounds so innocent, so pure. But I know from others who’ve been here that it’s far from innocent. People come here to fuck and get fucked, simple as that. Most here are simply looking for a good lay, to collect phone numbers from people they’re interested in and to have some fun. The atmosphere here feels exactly like that.

I know that we’re technically hired to be extra bodies, to make the event look more like a club or a real ball than a ceremony, but the people here seem to regard the whole event as a way to have fun. Which might be just as well, it’s not like we make a chance.

Werewolves mate with other werewolves, that is how it goes. An Alpha choosing a human as its mate doesn’t happen, as far as I know. And still I’m here, hoping to get the grand price of sleeping with an Alpha on top of the money we already get from being here. It would make my life so much easier, I’d be able to get out of the ruins and back to a normal life.

I walk over to the rack to see if my suit came through the quality control okay. Apparently, if your suit isn’t good enough they require you to wear one of the backup suits, and those are ugly. I shudder.

There, at the end of the rack, is my suit, the dark purple, nearly but not yet black, hangs beautifully. I was supposed to get married in it, instead I’ll be wearing it to impress people to sleep with me. How far I’ve fallen.

I grab the suit and quickly change into it. They fit just right and the colour complimenting my complexion and my hair. I stuff my other clothes and shoes into a bag and take it to another room. There I hand it to a man who puts them into a locker and hands me a piece of paper with a number on it. I put it in my pocket as I stand in line for the makeup.

I think it’s ridiculous that we have to get it done professionally, but whatever. I get paid to look good, the least they can do is make me look even better.

The girl behind me taps me on my shoulder. “Who are you looking forward to?”

“What?” I frown, looking forward to?

“Didn’t you see the list yet?” She holds up her phone, I recognise some names but most of them are unknown to me.

“Of the Alphas who will be here, silly.” She laughs and I have to stop myself from cringing at the high-pitched sound. She now hands me her phone so I can look at the list myself, but the names I’m looking at are all male.

“I thought there were also female Alphas coming here?” I hand her back her phone.

“Oh, right.” Her face falls and with a few taps and swipes she shows me a different list. “These are speculated female Alphas who come.”

It only proves how little I know about celebrities and werewolves that I don’t recognise any of the names on the list. Just as well.

She smiles at me. “I always have.”

So that is how it’s played. I turn back, right in time to be put into one of the chairs and get my makeup and hair done.

The hall slowly begins to fill with more and more people. I was one of the early ones to get changed so I sit at the back of the room, looking at my phone and the people filling the space. Most people are good looking, which is sort of a given at a party like this, I assume.

When we’re all here the guy from before steps forward. “There are a couple of rules. One, the werewolves get first pick, both the Alphas and the Omegas.”

Some people in the crowd groan.

“Two, no fighting, no arguing. I expect everyone to behave well and not make any trouble. Or you’ll be escorted out, no money, nothing.” He looks at us like we’re nothing more than stupid kids. “I mean it, we’ve done that before. The other werewolves will begin to come in soon, behave.” He steps down again and walks out.

Great. Rules, stupid rules. I’m getting less and less excited about this whole thing by the minute.

Around me people start greeting each other, forming groups, talking about the Alphas who are coming. Those who will definitely be here and those that they expect to show up.

Sure, I get that meeting a celebrity or an important Alpha is exciting. But this almost seems like they are worshipping some of the Alphas. It’s almost scary. Being a fan is one thing, but this… this is insane.

A group close by turns towards me. “Who are you waiting for?” A girl calls out.

“What Alpha, who are you waiting for?” The girl shakes her head like I’m dense.

“I have no idea.” Again, the obsession with what people to meet.

“Amateur. You’ll never make it.” The group doesn’t seem to understand that I’m not as invested as them, or apparently the other 99 per cent of the humans here. They turn away from me, moving even further away, as if I’m toxic or something.

You have been reading Omega's Fate (Mated to the Alpha 1), to read more, grab your copy below: