Cyra has fled to relative safety with two of her Alphas, but her other two Alphas have gone missing… 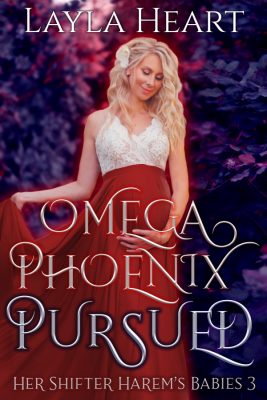 Cyra has fled to relative safety with two of her Alphas, but her other two Alphas have gone missing…

Everything in Cyra’s life seems to have gone wrong since she attended the Night Gala, an exclusive event for rich shifters, a few weeks ago. She escaped the party with her four fated Alphas, hydra Zack, griffin Spence, cerberus Max and centaur Liam in tow. Only to go on the run from the paparazzi and Cyra’s parents as news articles about them started to appear. When Cyra finally found some control back over her life, her parents sued Max for defamation because he dared to try to expose her parents’ lies.
With Max back in his hometown trying to defend himself and expose even more of Cyra’s parents’ lies, Zack at his side to make sure he makes it back alive, things fall apart even further. The morning that Max is supposed to show up in court, the apartment that Cyra, Spence and Liam are hiding in is attacked, forcing Cyra to transform into her phoenix shape for the first time in decades as she desperately tries to protect Liam and they barely make it out alive. When a local centaur clan takes them in, the three find out that Max and Zack also tried to get to safety, only that it backfired and the two are now missing.

Winter is approaching quickly, which makes safe travel in the mountains where the centaur clan lives complicated. Add to that that Cyra is pregnant with four babies, the whole world now seems to be searching for the near-legendary Omega Phoenix for their own goals and Max and Zack could be anywhere right now. The five mates are doing everything they can to find each other and make it through the winter alive, but will it be enough?

This is the third book in the Her Shifter Harem’s Babies series, a paranormal Omegaverse reverse harem #WhyChoose story. This book may include any of these elements: steamy scenes, ‘I need tissues NOW’ moments, cries of ‘why, oh, why’ and cliffhangers that make you bite your nails (and curse the author).