Freshly mated Omega Cyra and her four Alphas are being hunted, by Cyra’s parents, the media and the police… 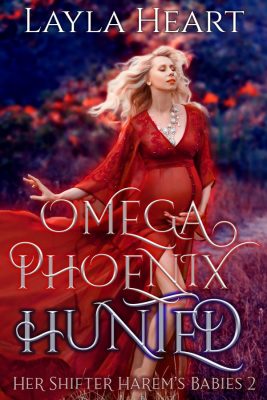 Freshly mated Omega Cyra and her four Alphas are being hunted, by Cyra’s parents, the media and the police…

At the yearly Night Gala, an exclusive event for rich shifters, four Alphas catch Cyra’s Omega scent and react to her instinctively, recognising her as their mate. They don’t know what to make of it at first, but as the party is not a place to talk privately, especially not with so much paparazzi around, they decide to sneak off and find a better place to figure out what’s happening.
Cyra, a rare Omega phoenix, has been hiding herself from the shifter world for years because she wants to live her own life and not be constantly controlled by an Alpha. As soon as an Alpha mates an Omega, the Omega becomes that Alpha’s property and Cyra refuses to live like that. More importantly, when an Alpha reacts to an Omega’s scent in an instinctive way, it means that they’re fated mates and belong together.
Or, well, that’s how it works normally, when you’re not a rare shifter type and your parents aren’t crazy rich… According to the law, there’s one thing more important than an Alpha marking their fated Omega and that is if the Omega is already promised to a different Alpha by the Omega’s parents. Marking and mating a promised Omega is illegal and punished harshly.

After Cyra and her four Alphas, hydra Zack, griffin Spence, cerberus Max and centaur Liam, have been spotted sneaking away from the Night Gala, their pictures are plastered all over the shifter gossip media. And, out of nowhere, Cyra’s parents show up, claiming that Cyra has been missing for years and that the four Alphas have kidnapped her. Even worse, Cyra’s parents claim that they had already chosen an Alpha for Cyra, that she has been promised to someone for years, even if Cyra didn’t know about it.
Of course, Cyra and her four Alphas only find out about the promised Alpha after Cyra has gone into heat and the four have already mated her, marked her as theirs. They never kidnapped Cyra, no matter what Cyra’s parents are claiming in the media, but they are now breaking a much more serious law, the law of illegally mating a promised Omega. If they’re found out, they could end up in jail, or worse, dead, leaving Cyra vulnerable to whatever insidious plans her parents have for her and the four Alphas can’t let that happen.

Which is why Cyra and her fated Alphas are now on the run from Cyra’s parents, the drama hungry media, who are exploiting this situation to the fullest, and the police…

This is the second book in the Her Shifter Harem’s Babies series, a paranormal Omegaverse reverse harem #WhyChoose story. This book may include any of these elements: steamy scenes, ‘I need tissues NOW’ moments, cries of ‘why, oh, why’ and cliffhangers that make you bite your nails (and curse the author).