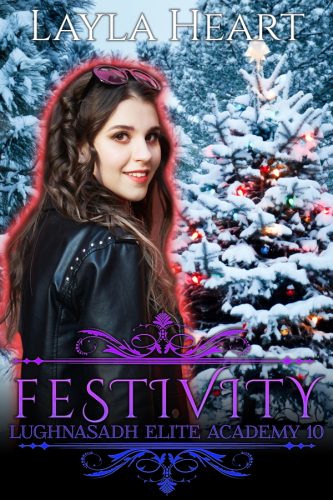 After all the mess that has happened in the last four months, Litha and her five lovers, Bane, Kit, Finn, Rune and Phoenix, are finally able to take things a little slower… Not!

With midwinter being one of the most important celebrations of the year, and Phoenix’ birthday falling on the exact same day, Litha and the others have their hands full between decorating a tree the size of a small house, preparing for a feast for all their family and friends, and keeping their eyes on the three small dragon shifters who have joined them.

That should be easy enough, right?

This is the tenth instalment of the Lughnasadh Elite Academy serial, a reverse harem #WhyChoose story. This serial may include any of these elements: steamy scenes, ‘I need tissues NOW' moments, cries of ‘why, oh, why' and cliffhangers that make you bite your nails (and curse the author).
This story includes MF, MM and also FF scenes, but everyone is primarily focused on Litha and there are no sexy scenes between the guys and the other girl.

Festivity was originally published as Lughnasadh Elite Academy 9.5 but has since been moved into the main part of the series as number 10, you will need to read this before the continuation of the serial.

Read the first chapter below!

When I open the front door of the house, I nearly stumble back. Rune is in his dragon form, a huge fir tree stuck on his back, and when I take a better look, Kit is sitting between the branches of the tree, looking positively impish.

“We got you a tree.” Lynn darts over to me, her eyes bright and she starts pulling on my arm. “Come see.” Lynn is one of the young dragon shifters Rune brought back with him when he and Finn were helping undo some damage that the previous fae king had done to the dragon people in the fae kingdom.

“Yeah, yeah.” I laugh, stepping out in the snow on bare feet, the cold bites into my skin, but I shrug it off, I can warm up again later. My control over my fire abilities has gotten a lot better lately, which is awesome when it’s freezing cold like this, I don’t have to worry about warming myself up anymore.

As Lynn drags me past Rune, I reach out to him and he pushes his head against my hand, letting out a low rumble, a mix between a laugh and almost the content sound of a very, very, big cat. His skin is ice-cold, but they’ve all been outside for hours, getting the tree. I might see a shared bath in our future, to warm all of us up at the same time.

When I can finally see past the lower branches of the tree, I have to stop, laughter bubbling up in me unexpectedly. These guys… “You didn’t have to bring it over with all the roots intact.”

The roots are almost as big as the tree itself, and I can’t imagine how heavy it must be for Rune to carry all of it on his back. The tree itself is bad enough, but with those roots and the soil still in it… Wow. I’m almost surprised he’s still standing.

Kit jumps from Rune’s back, lightly landing next to me, immediately wrapping his arms around me, putting his cold face in my neck. He’s so cold that a shiver runs through me. He chuckles, tightening his grip on me. “We had to. Finn wouldn’t let him take it if he ‘killed’ the tree by taking them off.”

“Ah.” Well, that does sound like my Finn, my fae, my nature lover. “And, where is the guy right now?” Because this is just half my family, I’m still missing a couple of people.

“Bane and Finn went to your parents’ place. Something about having to pick up more supplies? I don’t know.” He gives me a quick kiss in my neck, making me shiver again, and then climbs on Rune’s back. “Dewy… Sleepy Dewy. Time to wake up. We’re at home.” He moves around between the branches like they don’t keep poking him, and then he finds the littlest of the dragons.

Dewy lets out an unhappy sound, but it’s not entirely human, and I can’t help my smile as Kit lifts up a small blue dragon from between the branches.

“He fell asleep on the way back.” He holds the little boy tightly and then jumps off again, handing Dewy to me and I wrap him in my arms tightly, trying to warm him up again. He’s a water dragon, which makes him susceptible to the cold, but he still wants to go everywhere with the others. “Where do you want the tree?” Kit eyes me.

“Ehhh, I was thinking either out front somewhere around here, or maybe out back. I hadn’t really decided yet.” I like either idea. The front because it would give a bit more life to the whole campus, because it’s still so empty, but out back would be nice because we’d be able to see it from the living room.

Quiet footsteps come closer, and then Phoenix appears next to us, wrapped in a thick cloak, and she was smart enough to put boots on. “I think it’s more fun for us out back.” She takes a second look at the tree, blinking. “The roots? Why?”

“Finn.” Kit grins, and Phoenix nods like that explains everything. “I’ll go check for a good location.” Then Kit darts over to the house and disappears around the corner.

Rune looks back at us, giving a quick nod, and then follows Kit.

He still doesn’t move very smoothly with one of his back legs. His leg may be mostly healed from the stab wound from a couple of months ago, but he’ll probably always have the deep scar in his leg, even in his dragon form, and it will probably keep hurting when it’s really cold, but he’s doing better than even a couple of weeks ago.

I look down at the two little dragons, Dewy still asleep in my arms and Lynn is standing at my side, looking after Rune. Their older brother, Blaze, is probably with Bane and Finn, he likes being a ‘big guy’ with them, he feels like Rune ‘babies’ him too much. But, I guess, that’s normal eight-year-old behaviour. “Let’s get these two inside and warmed up. I’m thinking, hot chocolate.” I wink as Lynn looks up at me.

“With cookies!” She lets out a laugh as she takes Phoenix’ hand, already starting to pull on her. “I want cookies!”

“Yeah, yeah.” Phoenix smiles, looking back at me. “Do we have any left?”

I shrug. Probably not.

We made some yesterday, but I’m afraid that between the guys and the kids, they’ve probably already disappeared. A great excuse to make another batch, me thinks. 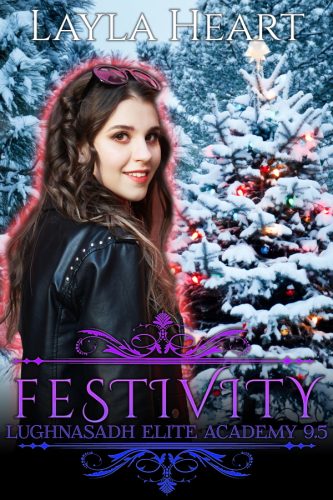