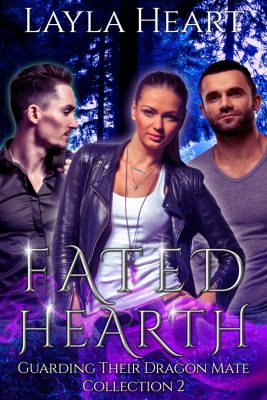 The town Sophia grew up in is in a very bad state. Earth dragons are going missing, leaving young kids orphaned, and nobody knows what’s going on or where they’re taken. To make it even worse, a group of rebels who were supposed to bring supplies to the town haven’t shown up, making everyone worried that they’ve been caught by the renegade fae soldiers.
Sophia and her men turn to an unusual source in their desperation to find answers, a magically sealed room at the hidden dragon library. A place nobody has been able to get into in decades.

When Sophia manages to finally unlock the room with a spell passed down from her witch father, everything she thought she knew changes. It seems her father was involved in things that nobody had any idea about, showing a side to him that Sophia doesn’t know how to combine with what her mother told her about him. To top it off, she’s confronted with a half-sister she had no idea existed, a half-sister with fae and witch blood.

Can Sophia and her men find out what happened to the missing earth dragons? And how much is Sophia’s father involved with what’s going on in the town right now?
But most importantly, can they heal the town and the people in it, so that they can thrive again, like they used to?

This collection includes the second three novellas in the Guarding Their Dragon Mate serial, Captured Dragon, Reclaimed Dragon and Ferocious Dragon, a six episodes long reverse harem #WhyChoose story. These novellas may include any of these elements: steamy scenes, ‘I need tissues NOW’ moments, cries of ‘why, oh, why’ and cliffhangers that make you bite your nails (and curse the author).
This story takes place in the same world as the Lughnasadh Elite Academy and happens after the events from the other series. Both series can be read stand-alone, they are about different characters, but they are connected.