Dragon hoards are supposed to be a beacon of unity, but Sophia isn’t so sure of that as her hoard seems out to kill each other… 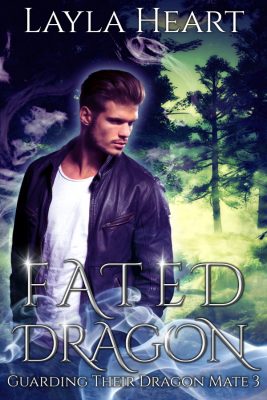 Dragon hoards are supposed to be a beacon of unity, but Sophia isn’t so sure of that as her hoard seems out to kill each other…

When Sophia and her men arrive at the dragon town, the night is only young, as fate seems keen to point out.
First, she kisses one of her guys, and almost gets him killed by one of the others. Won’t be the last time they attempt that…
Second, she hopes to get them all on the same page as she reveals that all four men are part of her hoard, her fated mates. That went over well…
Third, she finds a little dragon in the streets, hungry, tired, alone. An orphan. Just like her.

Returning home brings back many memories for Sophia, good and bad ones. But it also means she has to confront other things from her past, like the people she left behind, old friendships, old pain.
Can she keep her head cool as the leader of their rebuilding mission, while caring for a young orphaned dragon and regaining the trust of old friends?

This is the third novella in the Guarding Their Dragon Mate serial, a six episodes long reverse harem #WhyChoose story. This novella may include any of these elements: steamy scenes, ‘I need tissues NOW’ moments, cries of ‘why, oh, why’ and cliffhangers that make you bite your nails (and curse the author).