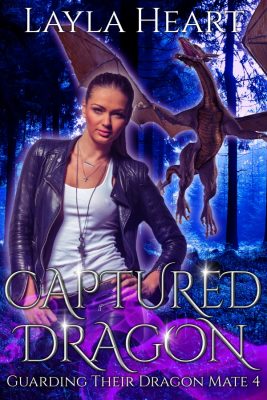 While Sophia, Gale and Topaz ‘get to know’ each other more intimately, things are the school they’re camping out at have taken a turn for the worse. A group of dragon rebels were supposed to arrive today, but they never did, making everyone worry that they might have been caught by the deserter fae soldiers roaming the area.

As Sophia makes it back to the school, she finds out that the parents of Gaia, the little earth dragon orphan, went missing last full moon and it’s another full moon tonight… Then more bad news reaches her, another two sets of parents have gone missing…

Sophia and her men try everything in their power to find out why earth dragons are going missing, what’s happening to them. Why can Gaia still sense her parents when they’re not there? And what does a magically locked room at the local library have anything to do with it?

This is the fourth novella in the Guarding Their Dragon Mate serial, a six episodes long reverse harem #WhyChoose story. This novella may include any of these elements: steamy scenes, ‘I need tissues NOW’ moments, cries of ‘why, oh, why’ and cliffhangers that make you bite your nails (and curse the author).
This story takes place in the same world as the Lughnasadh Elite Academy and happens after the events from the other series. Both series can be read stand-alone, they are about different characters, but they are connected.