YES! It's here! Today is the launch of the newest book in the Flowers and Keyboards series!

You can enjoy two chapters per week of this story, on Wednesdays and on Saturdays!

The story will be available on Tapas and Wattpad, AND, this is a new experiment, I've also put the book up on pre-order on Kobo, iBooks, Barnes & Noble and Google Play! The tentative release date for publication is June 7th. I say tentative since it's pretty far off and I know that things can get a little wacky sometimes.

There are always a couple of changes between the online serial edition and the published version (99% of that is simple quality increase…), but I know that some people really like to make sure that they can pre-order the book as soon as possible. It's not on pre-order on Amazon because Amazon takes away our pre-order privileges for a year if we have to change the date after we've set up the pre-order. Amazon will probably be added closer to the actual release date, but I'm not sure of that yet.

Also, don't forget that the giveaway is still running, and the first two books of the Flowers and Keyboards series is in the giveaway!! Check it out here: New Year, New Style Giveaway 1!

But, enough rambling from me, I'd like to introduce you to two lovely ladies, Mya (yes, Elliot's best friend) and Amber.

Amber runs a semi-popular makeup channel. It combines the two things she loves best, makeup and teaching people. While talking face-to-face with people scares her, talking to a camera is much easier, it feels safer.
That distance between herself and the people who watch her videos has always been right for her, until she meets a girl who makes her rethink everything she does.

Mya is a girl of many interests, from gaming to anime and manga to makeup and clothes, she loves it all. What she likes even more is to share her passions with other people, and she surrounds herself with those who love similar things.
She’s good at talking to people, she loves it even, but then she meets one girl who could undo all of that and expose her much darker side…

A new makeup brand brings out a rainbow themed collection and as both girls work together to collect every last piece of it, their lives start to change in ways they never expected.

Amazon (will hopefully be added closer to release) 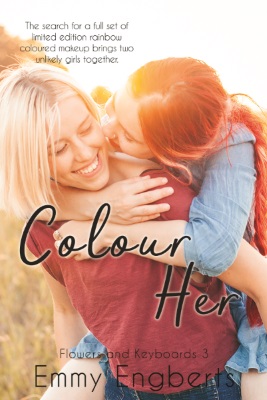 Vlogging = Video logging = A method of keeping a log or a type of diary through videos. This type of video content is especially popular with gaming, makeup and similar subjects that you can easily talk about in front of a camera and where adding video to the audio adds extras to the content. I’ve been doing makeup vlogging for a few years now, I’ve realised that no matter how scary I find talking to people face-to-face, talking to camera is by far not as scary, even when I know that people will be watching it later.

You can read the story as it's released through Tapas or Wattpad, or pre-order the book below!

Amazon (will hopefully be added closer to release)