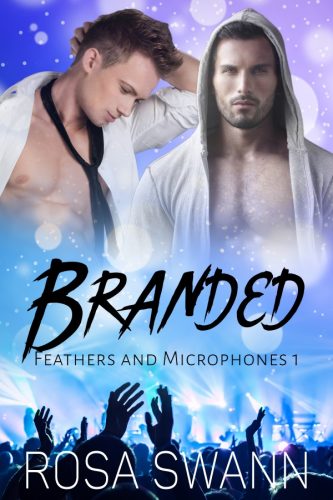 Florian has been trying to get rid of his angel powers ever since he lost his last charge in an accident that was entirely his fault. Ever since he spends his nights bar tending at the local gay bar, ignoring his angel nature and pretending to be human. Until one night, he meets a sexy man with purple hair on the roof of the bar and he wants nothing more but to spend the night with him.

Seth has been wearing his demon brand for years. The price to pay to bring his band to the top. But these days, life is nothing but a drag, so even though he has to protect his rock star image, he goes to a gay bar, hoping to find some solace. When he climbs up to the roof to take look over the city at night, a beautiful man proposes to spend the night together, and for the first time in years, he accepts. Is this a mistake, or is there more hidden behind the eyes of the beautiful stranger?

The plan was only for the night, but will the men be able to let each other go, especially after the secrets they reveal the next morning?

I love working at the bar, but some evenings are just straight from hell. I get it, I’m the youngest barman here by at least a decade. And even though this is not technically a gay bar, the place usually packed with men who are looking for dick instead of pussy.

I check the stack with cards next to the till. Fifteen, fifteen men who gave me their number, usually scribbled on the back of their business cards. Classy.

“Hey, beautiful.” I ignore the catcall, hoping one of the other men will serve him instead. “Hey, you, with the purple eyes.” Great, the one feature that sets me apart from the rest. My eyes, purple, like all angels have. The one feature that distinguishes me from humans, though luckily most people presume I’m wearing lenses or they’re too drunk to be taken too seriously.

“Fine, fine. What do you want?” I turn to the man, I know I should smile, but it’s been a long night and I just want out, lock myself in my room, have a quiet evening.

“Some of your juices would be nice.” The man grins, showing me rows of discoloured and crooked teeth.

“Maybe in a different life.” I pour the man a beer, pretty sure that was what he was drinking before his attention shifted to me.

“Don’t be coy, pretty boy.” The man leans over the bar.

I’m about to step back, away from the drunken man, but someone is behind me, blocking my way. The person wraps his arm around my shoulders and leans forward to the man. “Don’t be rude to everyone’s favourite barman. Apologise.”

“You sure?” Boss-man glares at the customer, who mumbles an apology. “See? Problem solved.”

I try not to roll my eyes. Boss is a big man, tall and very built, he looks out of place in a dingy bar like this, but at least he keeps all the creeps away from me. I turn to another customer, but Boss grabs the back of my shirt.

“I think you’ve had enough for the night. Forget those last fifteen minutes. I’ll get you your portion of the tips later.” He points towards the back of the bar with his thumbs.

I nod, glad to be away from the bar early.

“I just expect the bar to be squeaky clean when I come in tomorrow.” Boss laughs as he lets me past him.

“As usual.” I take my phone and keys from behind the bottles of booze. I walk to the back, close the big door behind me and let out a deep sigh as the quiet embraces me. It’s not exactly quiet, but the difference is significant enough that I can finally hear my own thoughts again.

I check my phone as I walk up the stairs to my flat on the second floor. The first floor is Boss’ place and he is nice enough to let me live upstairs from him. I don’t have to pay rent, but I also don’t get paid, just the tips. In exchange for living here I work at the bar most evenings of the week and keep the bar clean. I don’t think it’s a bad trade, the tips are enough for me to live on and pay for the things that Boss doesn’t cover for me. The best thing is that he doesn’t ask too many questions, like why I don’t have any work references or even a diploma.

I open the door, the stale air in the apartment almost choking me immediately. I try to hold my breath as I grab a beer from the small fridge and my pack of smokes from the table, I also open one of the windows a tad to let some fresh air in. I quickly back out of the room, close the door, lock it behind me again and walk further up the stairs, towards the roof.

The air is nice and crisp up here, the city lights greet me as far as I can see. I put the beer and the cigarettes on a ledge. Then I take off my shirt, time to spread my wings, quite literally. I roll my shoulders and the itching on my back starts as the wings slowly grow out of my spine. I move them, up, down, slowly stretching them. They used to be majestic things, huge, white as snow, but that was years ago. Before all the crap started, before everything went wrong. I reach out, I can reach the tips of my black wings with my fingers, even with the wings all stretched out. They have shrunken so much. In just a couple more months they will have shrunken so much that they will be gone and then the only proof of my being an angel will be the colour of my eyes. I’m looking forward to it and dreading it at the same time. There is nothing like knowing you’ve failed everyone who depends on you that makes you wish to become human, normal, boring.

I grab the bottle of beer and drink most of it in one go.

These nights, when the sky is beautiful and lit with stars, I do miss the times when my wings were still big and strong enough to carry me through the sky.

I retract them, the weight of them only a bother now they’re so small, and put my shirt back on. I light a cigarette and lean against the utility unit on the roof, even without the wings, standing on the roof on my own, looking at the lights below and the stars above it’s almost like I’m flying.

The door to the stairs opens and someone steps through it, the light in the stairwell almost blinding me, but not before I see it reflect off purple hair. I blink, purple?

The person closes the door, their steps slightly unstable and then they step from behind the shadows of the stairwell into the open space on the roof. They’re a man, well, a guy. His sleeveless shirt is flowing around him as he brings a bottle to his lips and takes a deep gulp. In the lights from below I can see his throat move as he drinks from the bottle, one, two, three swallows. Then he eases the bottle down again, staring at the dome of light in front of him. The music hall. That makes sense with his interesting sense of style and hair colour, a musician.

The guy steps forwards, closer to the edge of the building. He is now in a better light and I can see exactly how tight his jeans are and how loose his shirt is. While his jeans look painted on, when his shirt moves in the wind I catch glimpses of his naked chest through the sides of his shirt. Damn, he looks sexy and he knows it.

I reach down, moving myself into a more comfortable position in my jeans which are getting tighter by the second. I accidentally bang my elbow into the wall behind me and the guy turns around fast.

“Who is there?” He stares in my direction but I’m in the shadow of the building and the lights don’t reach this far. I can’t see his face, but I’m sure his voice sounded startled. “Hello?” He turns back, slowly, as if trying to see if something happens.

I can stay standing still, hiding in the shadows and go about my life. But the way the guy moves makes my dick hard and his voice… his voice latches onto something inside me. It’s not deep, but it has something special, something that makes me want to listen to him. I step forward, into the lights, but my footsteps are too light and he doesn’t react. “Boss doesn’t like it when people come up here.”

The guy steps forward, startled for real this time, and turns to me. “Who are you? Why are you spying on me?”

Spying, right, of course. “I said, Boss doesn’t like it when people are up here. It’s better if you go downstairs again.”

He cocks his head to the side, defiant. “You’re up here.”

“I’m not people. I live here.” That came out different than I thought it would. Not people, duh, I’m an angel, not human.

The guy doesn’t catch the double meaning to my words. He puts his hands in his sides. “So? Why doesn’t your boss like it when people are up here?”

“Because drunk people fall over the edge easier.” Well, that would imply there was anything to stop them from falling over. There is just a ridge, nothing more.

“Well, I’m not going to fall, so you can go away now.” The guy waves at me dismissively.

“Yeah, no. I was here first, I live here, so I’m staying. You go back to your luxurious hotel.” I didn’t mean to sound bitchy but somehow it came out that way. The way this guy acts gets under my skin and I’m not liking it. I don’t associate with humans, not any more. Not after the mess I made.

“Luxurious hotel? Right… Life as a musician is not all booze, luxurious hotels and sexy girls.” He sneers the last words and then points the bottle at me. “Not that you care, or anyone else.”

I step forward and grab his bottle, pulling him towards me until we’re almost standing nose to nose. “I’ll listen to you, if you get off the roof.”

The guy tries to look at me closely, but he blinks too fast, already buzzed by the beer. “And go where?”

“My room is just down the stairs, it’s warm, it’s private and there is cool beer.” I lick my lips and his eyes follow the movement closely. He seems interested enough, but the question is if he’ll follow a stranger to a closed room.

He huffs and turns away, now he is sideways I can see what he is trying to hide, his skinny jeans have gotten a lot tighter suddenly.

You have been reading Branded (Feathers & Microphones 1), to keep reading, grab your copy below: