Blossoming of Fate is the fourth serial in the Omegaverse Mates World, following Destin and Seb, and contains mpreg (male-pregnancy).

My Omega’s Return
(Blossoming of Fate 1) 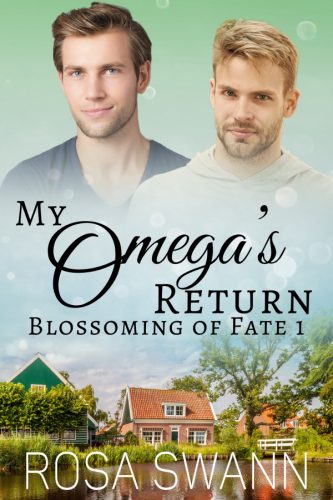 Two best friends have been apart for the first time in their lives, and it might have changed them more than they were ready to face…

Destin
I thought I was just picking up Seb, my life-long best friend, from the station for a week of wild antics. He desperately needs the distraction from his studies, he’s been working way too hard. But when I catch sight of him, my heart starts beating in a way I’ve never felt before.
Seb is my best friend. We’ve basically grown up together. He’s almost like family. Only, these new feelings inside me are definitely not ‘familial’ in the same way as they used to be. I want to claim Seb, make him mine, and that scares me. I’ve never wanted to mark an Omega before…

Seb
These last few months have been the longest stretch of time that Destin and I have been apart, living in different cities, no longer seeing each other every day. Destin decided to stay behind to work at his father’s company, while I went away to university.
After all the stress from classes and missing my best friend, I was looking forward to spending the week relaxing and catching up at home. Only, the moment I step out of the station and catch sight of Destin, I know that I won’t be relaxing this week. My heart starts to race and my body heats up, making me very aware that the guy who’s always been at my side is not just anyone, but an Alpha. An Alpha I’m very attracted to. An Alpha who, as far as I know, has no interest in male Omegas like me…

My Lover’s Resolve
(Blossoming of Fate 2) 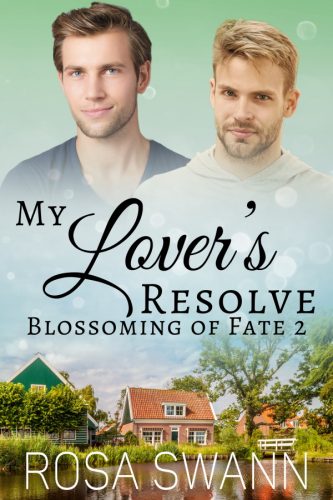 Two young mates agree to stay away from each other, but when they break that promise, everything falls apart…

Destin
I wasn’t supposed to see Seb for four years. That was the only plan we could come up with to keep us both safe, so he can finish his degree and I can work my way up at my Omega father’s company. Two weeks in, I can’t stand our separation any longer and impulsively go visit him anyway.
Not being able to see him was hard enough when we were best friends, but now that we know we’re mates, I really can’t stay away from him…
I’ve tried, but I can’t do it.

Seb
I know that I should send him away, I really should. But when Destin suddenly appears at the apartment, looking as troubled as I feel, I don’t have the strength to do it. Seeing him makes me feel alive for the first time in weeks and I don’t want to let go of that sensation.
Mia won’t let us stay in the apartment for the weekend, since she knows about Destin and me, and we’re not allowed to have mates sleep over. So we sneak away to a holiday park, hoping to spend a relaxing weekend together and come up with a better plan than trying to stay away from each other, which obviously isn’t working.
Only, the weekend isn’t as relaxing as I’d hoped and things get much, much more complicated quickly…