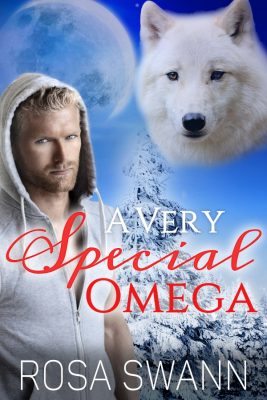 The morning after a full moon, Omega Jay wakes up naked, tightly hugging another man. He has no memory of what happened and flees from the scene.

Chase, sexy Alpha, remembers exactly what happened during the full moon, but he keeps quiet about it. It doesn’t seem important that they had sex until dawn.
Until he finds Jay on his doorstep, the night before Christmas…

It’s not every day that I wake up from the full moon, curled around another man and covered in mud and leaves. I have no idea where we are and a nagging feeling takes hold of me that maybe I did something weird last night.

I slowly uncurl myself from around the other man. But the man grabs hold of my arms, before he starts to move. “Hmm?” His low voice goes right through me.

“Can you let me go?” I try to speak, but it comes out more like a growly whisper.

The man sits up as he lets me go, then he turns around. “Good morning.” He flashes a crooked smile.

I shake my head. “Not a good morning. Who are you?” I try to stand up, but the man grabs my arms, so I sit down again.

“I’m Chase. Who are you?” He blinks, apparently finally waking up, his face changes for a moment before he speaks again. “And what are you doing here?”

“You’re asking me?” I slide side to side, trying to find a more comfortable spot to sit in. It’s cold, which isn’t strange for November weather. It doesn’t affect me much, as wolf shifters are naturally more warm, so we can deal with it, but a cold floor and sticks poking in your ass are still not very comfortable anyway.

“Yes. I’ve never seen you around. And you’re here when I wake up.” He crosses his arms over his chest.

I close my eyes as I let out a deep sigh. Whatever. “I’m Jay. And I’m going home.” I stand up again and this time he lets me. I shake and shiver for a moment. My whole body is sore, more so than normally after a full moon. We must have had quite the night.

“Do whatever you want.” He rustles behind me and when I look back Chase has turned back on his side and is apparently going back to sleep.

I can’t help but shiver again as I can’t imagine going back to sleep like this. Now that I’m awake, the cold is slowly getting a hold of me. “Sleep tight.” The words surprise me, and I close my mouth quickly.

Behind me Chase lets out a low laugh.

I roll my shoulders and try to loosen up my muscles before the shift. I focus on the wolf in me, I need to change back. Because I’ve got no idea where I am and a naked man walking around is going to attract more attention than a wolf. The shift comes on quickly and I drop on all fours as my bones and muscles twist and contort. Twinges of pain go through me, my whole body telling me that I’ve had a rough night. I don’t usually like shifting again so quickly after changing back, the soreness is just not worth it.

I shake my head, trying to clear it of the most recent scents and then follow our way back to the city. I hope I can still make my first class, it wouldn’t look good on my record to be late today.

I step out of the shower, wrapping my towel around me. It took me nearly an hour before I found my hiding spot for my clothes, way longer than expected. Along the way I found the place where I had run into Chase, who apparently stayed true to his name and chased me all over the place. But it doesn’t seem like I minded. This is one of those times where I wished I remembered more of the full moon nights. Normally when I shift, I keep in control of myself, I can guide the wolf to do what I want. But during the full moon it takes over my whole body and mind and I’ve got no memory of the whole thing. I know some others do, but I guess I’m not strong enough, which seems to be more common among Omegas than Alphas or Betas.

I turn in front of the mirror, my shoulders and chest are bruised and those are not the only spots. Not everything is visible, sometimes it’s just a sore spot that doesn’t show on the skin but I can feel it when I move. What the hell happened, what did we do?

To be honest, it doesn’t really matter. This was one time, one night. Next month I’ll go elsewhere, maybe that saves me from such awkward situations. Back home I usually stayed close to my family, which helped with not running into strangers. But moving to college, the new scene around here, it threw me off for a bit. The first two moons I spent locked up, but that didn’t help one thing. I had to move, to keep moving, or I’d keep all the moon energy inside, which didn’t make me a very happy person to be around.

I put on some clothes. I did miss my first class of the day, but I can still make the second one. I grab my bag and push in a notebook, my books for the class and a pen.

As I’m leaving the dorms I run into my roommate, Lane, he winks at me and sticks out his tongue. “You must have had a good night, you’re smiling, and late.”

I let out a deep sigh. “I finally got to run, that just makes me feel good. And I woke up in the middle of nowhere, I didn’t have a clue where I was and spent about an hour trying to find my clothes.”

“Well, you shouldn’t have locked yourself in for the past moons. You know it isn’t healthy.” Lane wraps his arms around me and pulls me close.

I wince and he immediately lets me go. “Sorry, sore from shifting twice in one night.” My body needs to heal in between, the pulling of the muscles and the changes in bone structure wreak havoc on a body.

“Ah.” He gives me a sympathetic look. “Come on, we’ve got time for coffee.” He takes my hand and pulls me with him.

I don’t feel like coffee, I’m tired and not really up for too much social interactions, but I follow Lane anyway. He’s my only friend around here, we got matched up with our rooms, and I’m glad that we did. The Omega hallway can be a weird place, some Omegas seem to only lock themselves into their rooms, hiding from the world, while others seem to go out every night, partying it up. Lane studies a lot, like me, but where I can be a bit antisocial, he is more of a social butterfly, going out at least twice a week. He takes me to all the good parties, which is worth it, even if I dread it every time.

Lane pulls me into the coffee shop and pushes me into a booth near the window, leaving his bag with me as he gets us some coffee. I open his bag and pull out his stack of painkillers. I forgot to buy new ones and he always has some on hand. Then I pull out a bottle of water and take the pills. By the time we’re finished with the coffee I should be a better version of myself again.

Lane comes back, putting a cup in front of me as he takes his bottle from me. “Here, to wake you up. Did you know that a guy is staring at you?” He leans his head to the side and I look behind me. In the entrance to the coffee shop Chase is staring at me, then he turns around and is gone again. “What was that about?”

I shrug, to be honest, I’ve got no clue. “Must be a creepy stalker.” I try to keep my voice light. What is the chance that the guy I met last night also comes here? This is a coffee shop really close to college, but that doesn’t mean much, does it?

I roll my eyes, but it’s true. Chase’s scruffy blond hair and blue eyes, combined with a very muscled body, must make him really popular with the Omegas. I still remember the feeling of having my arms wrapped around him, he felt so good. “Different subject. How was your night?”

Lane shrugs. “Not very interesting. I didn’t run very far, there wasn’t much need. Plus, you know. Mating season is coming up, so I didn’t dare to go far from the Omega group.”

I shake my head. “I got off track way too much. Next moon I’m coming with you. I don’t care about being awkward, but it might help with not getting into stupid situations.”

“Stupid situations?” Lane is interested now. I said too much.

“Theoretically. Even having to look for an hour to find my way back to my stash was stupid.”

Lane looks at me, I’m not sure he believes me, but it will have to do for now. I’m not telling that I probably got off with another guy and I can’t even remember a damn thing about it. That is just too insane.

“Time for class.”  I take my bag and stand up, grabbing my cup with coffee and waiting until Lane is ready to leave too.

“Don’t worry, we’ll be on time.” He smiles as he gets back into his jacket, grabs his bag and takes my hand, pulling me with him again.

Some people have asked us if we’re dating, which is kinda funny. Apparently holding hands is not a normal thing to do with friends. And I used to think that too. But physical contact simply comes with being friends with Lane. He is very touchy-feely, and after a few months with him around, I actually like it. It’s like a comfort blanket, he is just sweet like that. But dating him, never, we’re both Omega and he is totally not my type.

Chase on the other hand… I’m glad that Lane is walking in front of me, so he can’t see my face. Because now that my brain is finally waking up, it seems that the small memory of waking up next to the man is slowly getting into my head. Damnit.

You have been reading A Very Special Omega, to read more, grab your copy here: